If you're a parent to a child under two, there's a good chance you've got a That's Not My ... book lying around your house.

Sturdy board books for destructive toddlers, the series of books by the Usbourne brand also have textural elements for children to touch and feel. Two kids in, we have about a dozen of them, from That's Not My Kitten to That's Not My Truck.

What you may not know is that there's also a book for mums. Author Kasey Edwards wrote OMG! That's Not My Husband five years ago, and although it's now sold out, it continues to be a cult hit amongst parents. In fact, over the last week alone Edwards has been inundated with emails, Facebook messages and website queries asking where parents can buy it.

"I wrote the book after I had my first baby and my friends in mother's group were shell shocked to discover what had happened to their relationships that they had mistakenly thought were egalitarian," Edwards told Essential Baby.

"There's nothing like having kids to test how a man really feels about gender roles."

While irate dad bloggers and mens rights' activists have been appalled by a book they see as degrading to men, Edwards sees the overwhelming response from mothers as validation that many women can relate to the sentiments. And really, how many mums wouldn't snigger at the line, "That's my husband! He's texting me from the pub. 'Sex 2Nite?'"

Edwards has another parody kids' book in the range - OMG! That's Not My Child - which pokes fun at the fairytale of perfectly behaved kids.

Due to the sudden resurgence of interest in the OMG! That's Not My series, Edwards has asked her publishers for a reprint. We'll keep you posted. 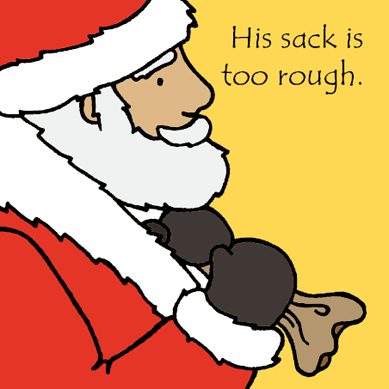 Meanwhile, we're not so sure that the original Usbourne series really is just for kids. That's Not My Santa has been an ongoing joke between my husband and I thanks to the immortal line 'That's not my Santa .. his sack is too rough.'